* In case of any delay in receiving the OTP, you may verify it later. Please proceed without verification.

Enter your City name or Pincode

Located in Mewat district, Punahana town is the headquarters of Punahana Tehsil in the Indian state of Haryana. The region comes under Gurgaon division and lies at a distance of only 38kms away from the district headquarters Nuh. The state Capital Chandigarh lies north to Punahana at a distance of 376kms. The country capital Delhi is also quite close by at 89.5 kms and with Jaipur at 173.9km. The town of Punahana is based absolutely at the border of Mewat and Palwal districts. 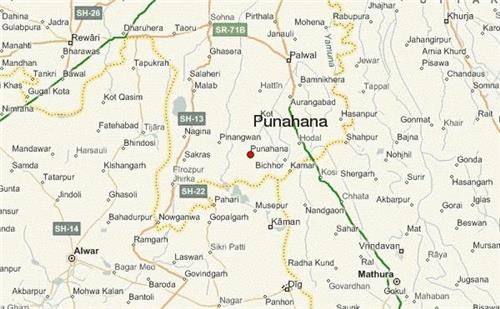 The exact meridians of Punahana village are latitude 27.87°N and longitude 77.2°E. While Hodal Tehsil provides a boundary on the eastern side, Hathin Tehsil borders the north, Nagina Tehsil in the west and Nagar Pahari tehsil covering the southern side of Punahana Tehsil. The nearby major cities to Punahana include Hodal, Sohna, Palwal, Nagar etc. The average elevation of Punahana is 187meters or 614 feet from the sea level and it stretches for 8km. The terrain of the area is mixed with both hilly areas and hillocks of the great Aravalli Ranges and plain low land. The soil in this area is quite fertile and comprises of sandy loamy, clay loamy and sandy soils. The texture however is quite light.

Semi arid as well as sub tropical climatic zone prevails in this region. Extreme weather is visible in during summer and winter. Summer are extremely hot with dry wind blowing. The hottest months are the month of May and June where temperature hovers around 30°C to 48°C. The monsoon season stays from July to September with the maximum rainfall visible in the month of July. The winter season stretches from November to February where temperature is quite cold ranging between 4°C to 25°C. January is the coldest month. However humidity is quite low in this region.

Punahana is a Muncipal committee and as per the latest census 2011 has a total population of 24,734 inhabitants. Among this male individuals consist of 12,916 and females 11,818. The average child population in this area of kids within 6 years of age is 4840 which comprises of 19.57% of the total population. The sex ratio of Punahana Village is around 915 per 1000 male. Around 9.28% of the total population here falls in schedule caste while there are no schedule tribes in Punahana. Literacy level of Punahana is quite low in compared to the state average which is 75.55%. The present literacy level here is 66.41% with 78.98% male literacy but a huge shortfall in women literacy featuring at 52.72%. However initiatives for the same are taken, with plans for school for the older people. The principal language of this location is Hindi however there are people who speaks Punjabi and English too.

Being a Muncipal Committee, Punahana is divided into 13 wards where elections take place in every 5 years. Of these there are 6 general wards, 1 reserved for schedule caste, 2 reserved for backward class and 4 reserved for women. The Municipal office remains in charge of all municipal works in the area like sourcing drinking water, ensure cleanliness and hygiene and initiatives towards road construction and imposing taxes in the area.There is around more than 3000 houses in this region whose administration and arrangement of basic needs lies in the hands of Punahana Municipal Committee.

Muslims forms majority in Punahana and are referred as Meo. These people were originally Rajput Hindus who were later transformed to Muslims. These people celebrate both the festivals of Hindu and Muslims and follow many popular cultures and customs common to both both religion. All the major festivals like Diwali, Holi, Eid are celebrated here.

Agriculture is the mode of earning in Punahana. Various agro based companies were based here. All groups of people are basically agriculturists. The major crops yielded in this region include bajra, wheat and mustard. However the average cultivation here is quite less in compared to the farming done in other districts of Haryana. The agricultural pattern used in this area is traditional and is mostly depended on rainfall. The next prominent source of income in Punahana is animal husbandry. Goats and sheeps are kept by the people here and they sell the milk at quite less prices. Again poultry population is also not high but in a considerable zone to fetch income.

Punahana does not have too many health centres or hospitals in the area. But there are well facilitated Community health centers and Government Primary health centers in the area which caters to the immediate medical needs of the inhabitants. Both the health units have experienced doctors and efficient medical staff to give primary treatment. Apart from this both the health centers have options for vaccinations and free medicines. Punahana does not have many chemists’ shops too to cater the needs of the inhabitants. However there is one well stocked shop in the area having all major medicines.

Punahana is a small place and is devoid of most modern facilities and arrangements. Postal services, banking and telephone and broadband services are available in this region. Phone connectivity is one of the most important facility in any location and in Punahana the same is provided by BSNL, Idea, Airtel, Vodafone and Reliance. Broadband services are also provided by these companies only. Though on can find banks post offices and few other important services in this part of Haryana.

Banking services is quite strong in the area with presence of 4 major banks. The banking organizations based here is reputed and has enough facilities in regards to financial management in the area. Most of them have core banking with all modern facilities.

Law and order is one of the most important administrative criteria in every location. The jurisdiction of Punahana comes under Punahana Police station where the department takes every initiative to keep the area safe, secure and peaceful. Apart from small crimes, the area is excellent to live in without any major criminal activities in the area.

Punahana is a small town with no prominent tourist spots in its area. However the geographical location of the area is such that it facilitates the visitor to visit some prominent attractions located close to the town. The most attracting tourist spot near Punahana is Dabchick resort which is based at a distance of 18kms from the heart of Punahana town and is a harmonious place in the lap of Mother Nature. Apart from this one can also visit Govardhan at 52kms and Vrindabhan at 63kms from Punahana for its religious significance or popular cities like Nuh at 37km and Sohna at 50kms only. There are no hotels based in Punahana Village but one can stay at Hodal which is only 18kms from Punahana with best quality budgeted Hotels

Transportation in Punahana has also improved in the last few years. Though the town does not have any railway station in its area but it reserves good connectivity with Hodal railway station at a distance of 18.3km. Several express and passenger trains pass through Hodal connecting Delhi and Agra. The distance to the railway station can be covered through public buses travelling in this area. Apart from this one can also connect to Banchari Railway station at 19km, Sholaka Station at 23km and Kosi kalan railway Station at 23kms. The nearest airport to Punahana village is Indira Gandhi International Airport at a distance of 87km connecting many major domestic and international locations. Road transportation has also improved in the last few years in Punahana. Haryana Roadways State Transport has introduced several buses in this route connecting Punahana to popular detinations like Delhi, Agra, Chandigarh, Hodal, Palwal, Sohna and many others. Major buses are available from Model road bus stand in Punahana. Apart from this local transport includes private motor bikes and public autos to travel shorter distances. However public autos are much lesser in numbers.

In a nutshell it can be stated that Punahana town is one of the promising places of Haryana and it can be improved a lot in terms of economical and social status. Though initiatives are taken by the state administration but many are still yet to be executed.

Comments / Discussion Board - About Punahana